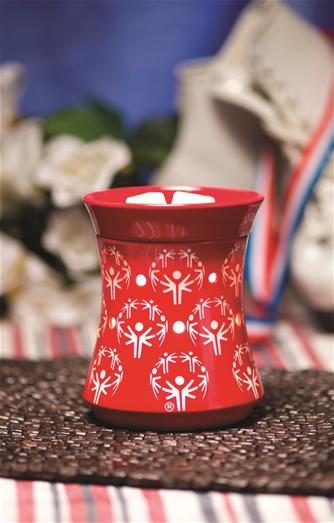 Today is a huge day for more than 2,300 athletes — it’s the opening day of the 10th Special Olympics World Winter Games! The 152-strong U.S. and 101–strong Canada contingent are there, participating in alpine and cross-country skiing, snowboarding, snowshoeing, speed skating, figure skating, floor hockey, and a floor ball demonstration. Like every Olympics, the winter games promises to be phenomenal: full of excitement, achievement, and the thrill of accomplishment. And if you’ve purchased Scentsy’s Charitable Cause Warmer, Champion, you’re part of it all, too! That’s because $8 from every purchase of Champion goes to Special Olympics International. But don’t worry — if you haven’t bought Champion yet, you still have time to support this amazing cause and twice the reason. For every Champion Warmer sold the week of the Winter Games—January 29 through February 5—Scentsy Fragrance will gift a Champion Warmer to an athlete on Special Olympics Team USA or Canada, until every athlete receives one. In addition to the gifted warmer, $8 (USD)/$9 (CAD) will still be donated to Special Olympics International for each warmer sold; a special opportunity to give to this deserving charity not once, but twice. A few months back, I asked Matt Caropino, the sports and training manager for Special Olympics Idaho, what the games mean for the people involved. “In the moments of the Special Olympics experience, the athlete is changed from a person of diminished value to a champion,” he said. As the Games start in South Korea, don’t forget that you have the chance to be a champion yourself by supporting this organization that has provided hope and real happiness to thousands of people with intellectual disabilities.

Did you know what the Special Olympic represents... The logo has five people who each have six arms. The down position means "downtrodden", remembering a time when many people thought those with intellectual disabilities were not able to make good decisions or try new things. This often describes the lives of athletes before they became involved in Special Olympics. Many had few friends and spent most of their time alone. The straight arms mean "equal", showing that our athletes are just like everyone else. The raised arms represent "joy", and realizing ultimate goals. The five people represent the five continents involved in Special Olympics at the time the logo was created. The people are placed in a circle to represent the world as there are Special Olympic athletes and volunteers in almost every country around the globe